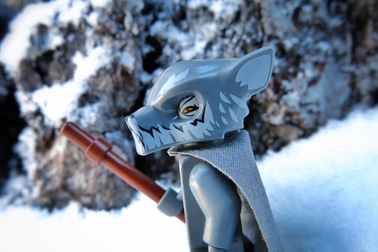 It all started many years ago. A group of four bricks - well, five if you count Rover - discovered a human sailboat. These bricks were Nigel, Jerry, William, & Cali (and like I said, Rover the dog). They hatched a plan: board the boat, take it over, and sail it to warmer climates…sounds like a good idea, no?

Now, they'd never done anything like this before, and it turns out they needed help. Luckily, a few ninjas lived close and offered to get them into the sailboat. Once aboard, the team got used to the place and explored the galley, the head, and everywhere they could. This got them noticed…noticed by a group of pirates that already lived on the boat! It turns out the pirates also wanted to take it over…yikes. 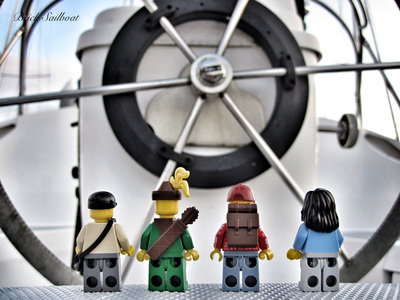 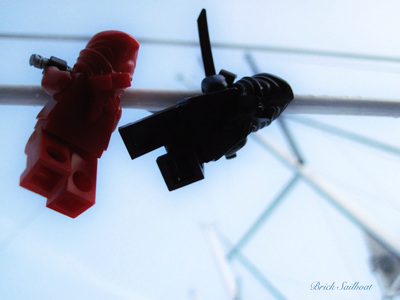 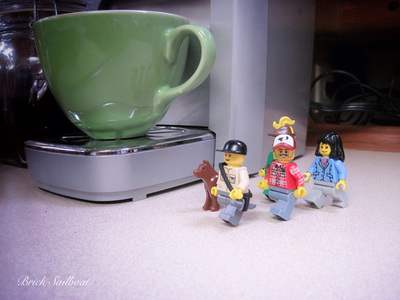 The pirates and brick team seemed to avoid each other until one day Rover the dog fell through a hole in the galley cutting board. The pirates seized the opportunity - they found Rover and captured him! They used him to sniff out the sailboat engine keys…with the keys the pirates could {probably} motor the boat out of the marina!

Once Rover found the keys, the pirates had no more use for him. They decided to mail him to the Caribbean! Since the brick team always sticks together, they would be sure to follow…then, the pirates would have the boat to themselves!!! Pirates - 1. Brick Team - 0. 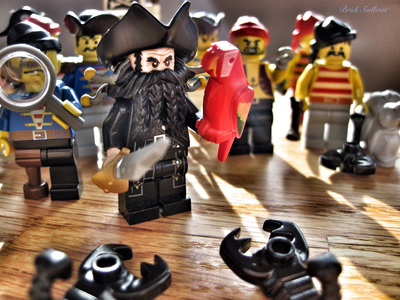 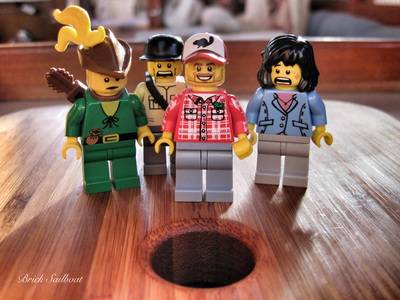 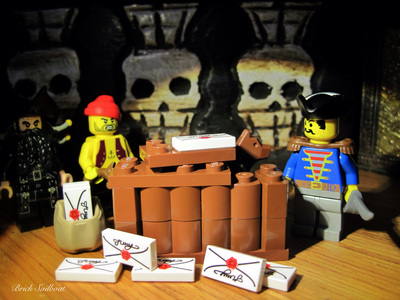 The road-trip to save Rover.

The pirates did send Rover in the mail…but the brick team went on an epic road trip to save him! While traveling, Jerry stumbled upon a lamp. It wasn't just any lamp, it was a magic one! Jerry, not the most graceful dude, tripped and accidentally rubbed the lamp…A genie came out and granted him 3 wishes! 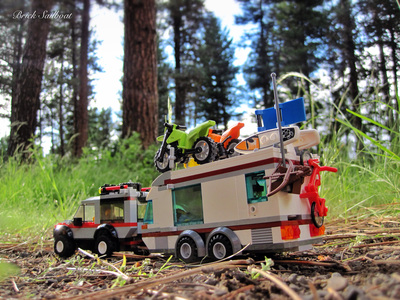 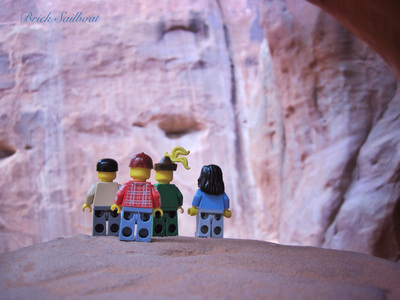 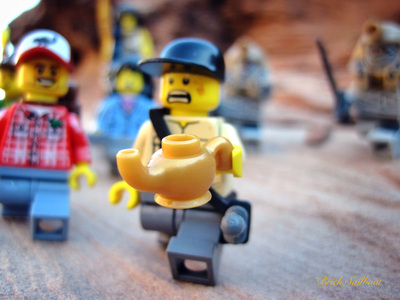 Jerry's wishes:
1. I wish we were somewhere warm.
2. I wish that we weren't with the scary sand people, that we were with familiar faces.
3. I wish someone would put Rover's crate in our path.

Jerry's first wish sent the team to the desert. Here they were approached by the Sand People - they claimed the lamp was theirs and they demanded it back (the brick team ran from them!). Jerry's second wish brought the pirates into the picture - they were now on the road trip together (and not too happy about it!). Jerry's third wish worked out though - the mysterious birdman stopped the mail truck and broke Rover out of the box - he was free! They all (even the pirates) returned safe to the sailboat.

Pirates love to party. Every year they throw a Halloween costume party. One year, they decided to host the party at a house right next door to a bank…a bank they wanted to rob!

The pirates got a tip that the Sand People's magic lamp (the one that Jerry accidentally used before) was in the bank vault next door to the party. The pirate Captain hired the white ninja to break in to the bank and steal the lamp. With the lamp, the pirates could use their 3 wishes to take control of the sailboat, get rid of the pesky brick team, and sail the brick sailboat to paradise! 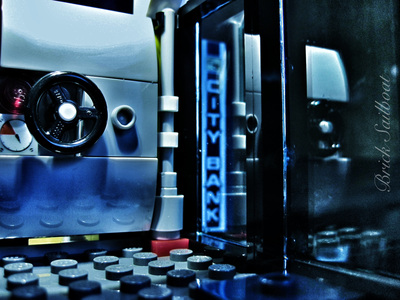 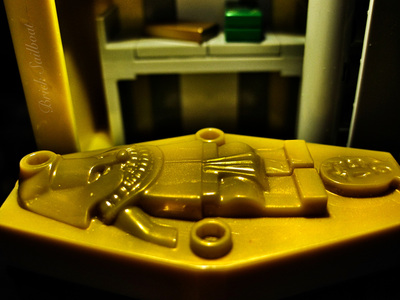 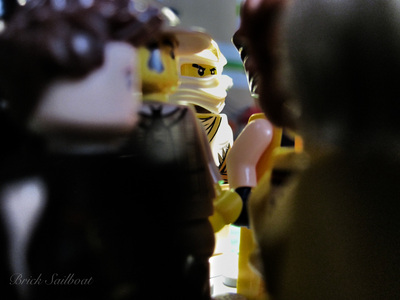 Plans change. The brick team caught on to the pirates plan and snuck in to the party.  The white ninja had some problems too. Richard, the pirate Captain's brother, used some bad dudes to  dynamite the vault and grab the Sand People's treasure. 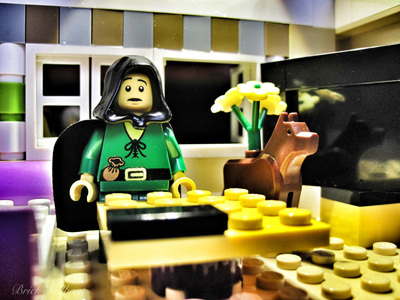 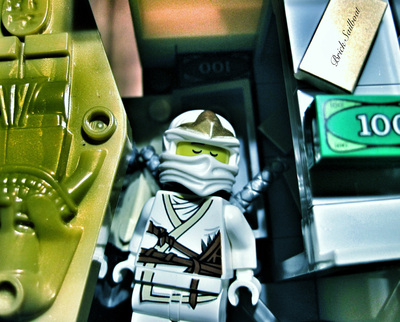 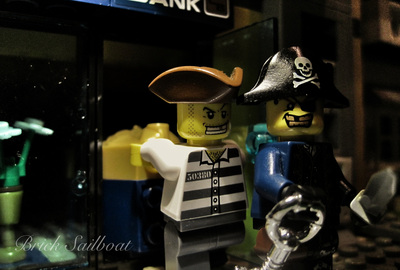 To make matters worse, the Sand People crashed the party too! They grabbed the treasure from Richard and went on their way. The white ninja, seemingly passed out in the vault, actually hid in the treasure chest and was taken back to their hidden Golden Gardens  lair. The brick team admitted partial defeat. The pirates celebrated! With the white ninja infiltrating the Sand People's lair, it wouldn't be too long before he grabbed the lamp for the pirates! 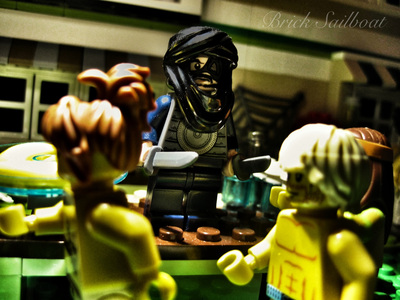 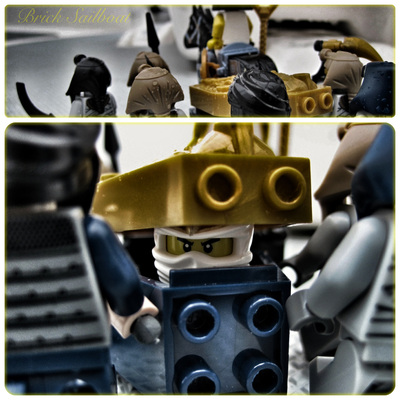 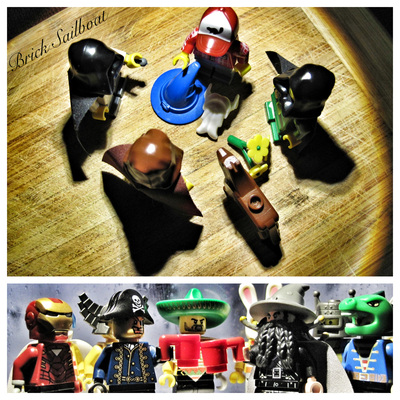 Awhile later, on a camping trip, the blue ninja arrived to give Nigel & Jerry a map to the entrance of the Sand People's secret lair. He hoped the brick team would thwart the pirates plan to get the lamp.  The brick team went on an expedition to the secret lair. The white ninja followed. 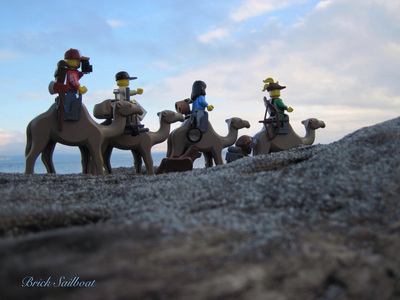 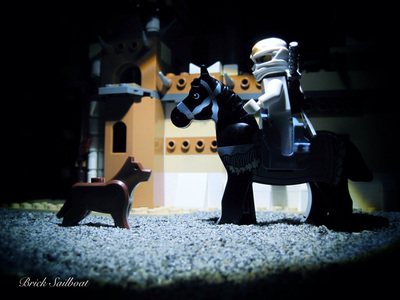 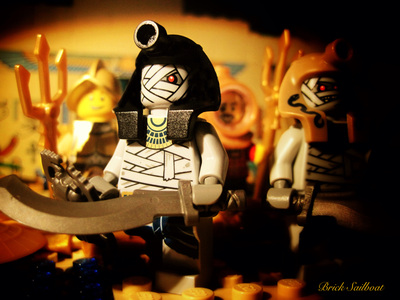 And remember: LEGO®is a trademark of the LEGO Group of companies which does not sponsor, authorize or endorse this site